The story of the Seal Woman with its reminder to return to the homeplace within stirs a memory. A large seal makes her way up the cement path that leads from the sea to the dock. I gaze at her and she holds my gaze. I have just disembarked from the ferry that makes its way between the islands of Mull and Iona. It is March 2010, and I am just returning from the sacred storied island of Iona. I came here with the encouragement of Fionntulach, leader of the Ceile de, an ancient order that began in Ireland in the early years of Christianity. 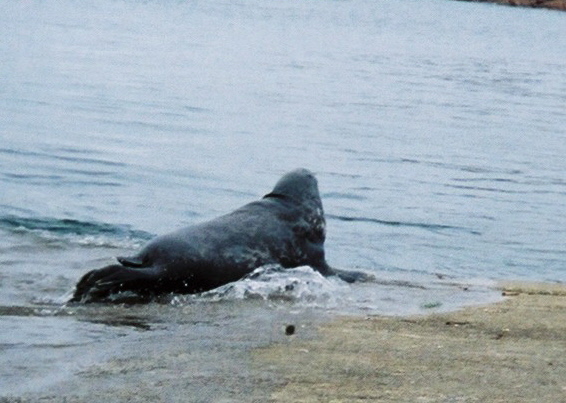 Two days earlier in Edinburgh, I had met Fionntulach at the city’s annual Interfaith Festival. Over an evening and through the following day, I listened as Fionntulach taught through stories, songs, dance and ritual. I learned that a remarkable change happened among the Druids, the priests of the ancient Celtic religion in Ireland, somewhere around the time of the birth of Christ. There arose among the Druids a group who became known as the Strangers. They spoke out against the ostentations, the warlike behaviour that had characterized the Celts for centuries. They dressed simply in linen, wandered through Ireland, seeking hospitality wherever they were, teaching a new consciousness. They told stories of a Holy One who would be born of a Virgin, One who would initiate a new time of peace and love. These Druids, who separated themselves from the others through their belief in one God of Love, grew into what became the Ceile de. As spouses of God, they married the inner mysterious force within themselves, dedicating their lives to working for God.

Before the early Christian missionaries devised the Ogham writing, its simple lines and strokes based on the Latin alphabet, the Celts kept no written records so dates are hard to ascertain. But it seems that the appearance of these Strangers was either just before or just after the Birth of Christ. Though the fifth century saint, Patrick, has long been honoured as the first to bring Christianity to Ireland, it now seems that the new faith may have arrived as early as the first century. And when these first Christian travellers spoke of a Holy One, born of a Virgin, preaching love, the Celts recognised the tale told by the Strangers. This is why the coming of Christianity to Ireland was without bloodshed, with “nary a martyr” as the old tales say.

The ancient order of the Ceile de has endured since the early centuries of Christian Ireland. Fionntulach’s life is devoted to restoring its teachings as well as the ancient practice of inviting others into a form of membership in the Order. There are small associate Ceile de groups forming now in the British Isles and in North America.

When Fionntulach herself discovered the Ceile de, its remaining members were elderly. Today only Fionntulach and Mary, who was with her Edinburgh, continue to travel and teach. In the long tradition, the order has had no fixed abode, (Mary and Fionntulach each live in their own small cottage in Scotland), no written rule, no dogma. The early members would choose a hut in the woods. Others would gather around them. They were known as “people of the land”, a community gathered by the vision of a founder around the transformative power of love, the love of God “too big for the head to understand, but not too big for the heart” Fionntulach explains. The only rule of the Ceile de is “Listen to and obey the Christ in your heart”.

“Listen to your own heart” cancels any other rules. But if you can’t trust your own heart, find a soul friend, an “anam cara” who can help. Fionntulach told us that her own anam cara was a member of the Ceile de in Ireland. Each time she went to see him, she felt his spirit at the end of the road that led to his house, for it had extended that far.

The last Ceile de Monastery closed in Scotland in the twelfth century, and earlier than that in Ireland. As the Roman Church gained ascendancy over the Celtic, the Ceile de were viewed as “heretical”. Members were told to either join a Monastic Order of the Roman Church, the Benedictines or the Augustinians, or to renounce their spirituality. Fionntulach said most were wise enough to leave and quietly maintain their Ceile de Spirituality.

Pre-Christian mythology among the Celts tells of an invisible god who becomes visible in the feminine, able to be touched with the senses. In one myth a god who wanted to know itself divided into invisible and matter/Mater (universe, earth, body). So the Christian story of an invisible Father and a visible mother (Mary) birthing the Christ made sense to the Celts: Christ, born of a heavenly Father and an earthly Mother, represents perfect balance. Fionntulach spoke of the need to find a balance in our relationship with God, who is both transcendent Father and immanent Mother.

The “Journey Prayer” from Sacred Chants of the Ceile de is a sacred movement that Fionntulach led for us.

We move in a circle, hands over heart, then open out to love, walking on the earth that knows and remembers us, making with our arms a waving motion as we integrate the dualities: light and dark, spirit and matter, masculine and feminine. Then we reach to heaven, draw it to earth, give birth, and honour the child born of the dualities.

The words we sang are these: Oh God, bless every step that I am taking and bless the ground beneath my feet.

In a few days’ time, the blessing of the Journey Prayer would carry me to the Island of Iona.