Along the lane that leads to my house, there are many many trees, evergreen as well as deciduous, including several ancient apple and crab-apple trees. Year after year, I had driven past them, scarcely noticing their flowering, their fruitfulness, their quiet winter sleep. In the late summer of 2013, some combination of factors led to an explosion of fruitfulness for one crab-apple tree just where the lane ends at my driveway.

I had noticed the tree the day before, saw that its two large branches were split near the trunk, their massive burden of crab-apples hovering just above the ground. I thought the tree might have been struck by lightning or else pummeled by winds in a recent storm.

I began to fill a large bin with crab-apples, so eager to be picked that they nearly leapt from their branches. I worked quickly, mindlessly, concerned only that these small apples should be “used” before they fell to the earth to rot.

After nearly an hour of moving heavy branches that hung all askew, picking as many apples as I could reach, I decided I could do no more. I was hot, sticky, and being slowly devoured by a local chapter of mosquitoes who had found me out.

Then, I happened to look up at the tree. Something shifted in me. I was aware of a presence, a dim dark knowing, that moved my heart. Above me, the two split branches hung like almost-severed arms, and above them there was no great trunk. This was it. The tree was hopelessly broken, and would not bear again. Somehow I knew that it hadn’t been lightning or fierce winds but the sheer weight of this huge crop of apples that had broken her branches. This feast of fruit she offered as her dying gift.

Did I acknowledge that? Offer my thanks? I think so, but it was a brief act. I was eager to get out of the sun, away from the mosquitoes, into my swimsuit.

Walking through the woods to where a stairway of carefully-placed flat rocks leads down into the Bonnechere River, I sought relief from furnace-like heat.
Embraced by the slowly moving river, I felt at first only the bliss of coolness, buoyancy. But gradually there came again the dim knowing that I had experienced beside the tree. A presence, a something, a someone, cooling me, embracing me, welcoming me into its life…

White Buffalo Calf Woman taught her people that all things are interrelated, so they must reverence all of life. This, Jean Houston teaches, is what the power of Interrelatedness is about: a vision of caring with a sense of the whole; we need an overarching vision that is so simple and alluring that we can see what can be, not from many different perspectives (science, art, religion, etc.) but from an all-inclusive vision. Jean sees the Power of Interrelatedness as an incredible invitation from the cosmos to create deep caring.
Interrelatedness or Care has been at work in the universe for 13.8 billion years, says Brian Swimme. Without it, the universe would fall apart.

Parental care emerged as a value in the universe because it made survival more likely when the mother and father fish care for their young. As reptiles evolved, Swimme speculates that either they discovered caring, or perhaps it evolved along with them. Reptiles watch over their young and do not eat them (as do some fish). The amazing power of care deepens with the arrival of mammals, whose care continues sometimes for a lifetime. This, says Swimme, is the universe showing what it values, enabling mammals to spread out. 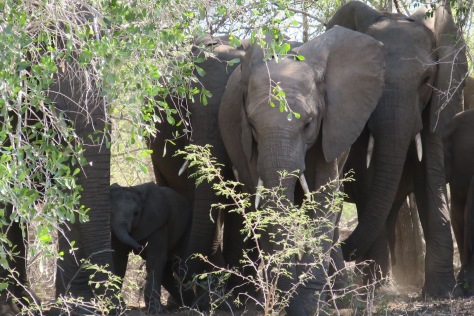 While travelling in South Africa, my friend Debra Hawley took this photo. Notice the baby elephant to the left. Mother Elephants care for their offspring for fifty years.

In some species of mammals, the female selects among her suitors the male who offers the best chance of having her offspring survive. The female is behaving in a way that will affect the next generation. Through her, the universe is working to extend care. An intensive study of baboons led researchers to find that when a female chose a sexual partner, one of the qualities she sought was tenderness. Thus life seeks to deepen and extend care.

In a human person in whom the Power of Interrelatedness is strongly present, we see a psyche attuned to relatedness, with the capacity to identify another’s worth, and to be sensitive to the needs of others. Care can result in true devotion, service, nurturance. However Swimme cautions that this power needs to be balanced with the Power of Centration, lest one become so absorbed in the needs and values of others that there is a loss of the self.

Care has to be evoked. A mother sea-lion establishes relationship with her pup by licking, nuzzling, thus evoking her own motherhood. It is the same for us humans, says Swimme. We need to find ways to activate these deep cosmological powers so that we can interact with the universe. This requires imagination. The power of care is evoked out of the plasma of the early universe. How do we enter into that process of evoking care? Just becoming aware is to participate.

How we position ourselves within our relationships with all of life is crucial, and is an act of imagination. To position ourselves in order to USE life leads to the extinction of countless species. Even 100 million years of parental care was not enough to save many species of fish from extinction. The shaping of our imagination by economic, educational and manufacturing systems that see use as the primary mode or orientation towards life on the planet, also views children in schools as “products” to be shaped, (or views a tree’s bounty of crab-apples as something that must be “used”.)

What would be another way?

Swimme notes the amazing capacity of humans to care, a power that is coded in our DNA, where life has extended its care through us. But we also have, through the power of language and symbol, through our conscious self-awareness, the capacity for empathy. We can learn to experience care for another species, even as we can imaginatively occupy another place, and extend our care to other cultures. With deepening compassion we move outside of our own boxed-in perspective.

Seeing that cosmological care is built in from the very beginning of the universe, some people today speak of the Great Mother or Mother Earth. This, says Swimme, is the cosmological power of care employing a powerful image or symbol to reflect upon itself through the human. Paraphrasing Meister Eckhart, Swimme says that “the eye we are using to regard care in the universe is the same eye that care is using to regard itself”. He asks: Is the role of the human to provide the vessel for a comprehensive care to come forth in the universe? The space in which this will take place is within the human.

On that September day, I was given the gift of experiencing interrelatedness directly in the self-giving bounty of a crab-apple tree, in the welcoming, cooling embrace of a gently-flowing river. Great Mother felt very close, inviting me, in Jean Houston’s words, into “a vision of caring with a sense of the whole”.