After our ritual in the sanctuary of Isis, we make our way towards the shore, seeking out places to wait. Some of my companions cluster in groups, but I want to be alone, find a stone wall to sit on. Already the eastern sky is growing pearly, then striated in shades of pale mauve, peach, soft yellow, rose, preparing to welcome the sunrise.

Across the Nile, behind a crest of low hills that lie like a body outstretched, the fire appears. There is an opening between the hills at the place where the sun bursts forth. The words of Isis echo in me, “the day which shall be born from the womb of this darkness.”

There is a desire in my heart. As the sun rises, I hold it out in trust. “Let me be as you were, Isis. You were a teacher, you gave the women of ancient Egypt the song of the wheel, you taught them to weave, you gave them your love. I want to be a teacher, a weaver when I return.”The sacred moment ends, leaves me with a sense of being deeply heard.

I turn to walk back up to the monuments above the shore, ready to rejoin my companions. A woman from Ireland is standing near the sun-warmed stones. We had enjoyed a conversation at our late dinner under the Nubian sky on the night we visited Abu Simbel. Now  I see in her face a mirroring of the wonder and light that are within me. We speak of our joy at being here, take one another’s photos against the island’s beauty, wanting to hold the memory.

I notice our group clustering around Samei. He walks us around the island’s great temples and colonnades, the stone glowing gold in the morning sunlight, holding the grace of Greek and Roman design in their shapely pillars. We see massive rows of Greek columns, towering structures, architectural beauty unlike any that I have ever seen. Standing under the great kiosk of the Roman Emperor Trojan, we look up at blue sky framed by an open roof of stone.

As we walk, Samei tells us the long story of Philae’s conquest by cultures and religions. Up close, as we examine the larger than life carvings incised into the outer walls of the temples, I am appalled to see that many of the faces of the Egyptian gods and goddesses have been savaged. Samei tells us it was Christians who ruthlessly chipped and chiseled away the faces of the gods. I feel horror, deep shame, as I imagine attacking hordes of Christians arriving in boats, descending upon Egypt from where?

Taking pity on what he sees in our faces, Samei softens the story a little, explaining it was the Egyptian people themselves who, becoming converts to Christianity, wanted to destroy the faces of their ancient gods.

As though in answer to the longing I felt in the sanctuary of Isis to read the hieroglyphs, Samei gives us a beginner’s lesson. Pointing to carvings high above us on an outer wall, he shows us that beside each figure are a series of hieroglyphs beginning with his or her name. Next to Isis, the hieroglyph of a throne; next to Horus, the sun; beside Hathor, wife of Horus, the hieroglyph of a sun with two curved lines above it reads, “House of Horus.” I am five years old again, beginning to learn the sounds of the alphabet. It feels wonderful.

“Don’t try to understand,” Samei counsels, “just experience. See, in this panel, the King is speaking to the goddess and she responds.” I look at the two carved figures, each focused on the other with a reverence, an intensity that is palpable. The series of hieroglyphs between them are words. I think of the words above characters in comics only this is elegant, noble, mysterious. I ache to read what they say. 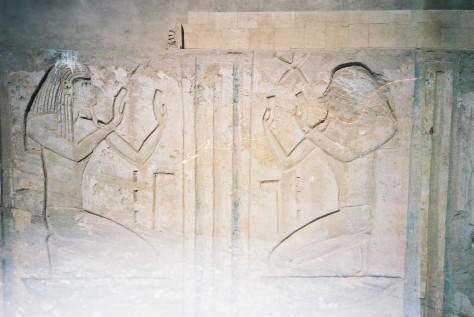 We leave this sacred island, with its still undeciphered messages, return to the ferry, then sail home to the Moon Goddess. Only later I realize we have come here on the 13th day of November. It was the 13th day of each month that Mary chose for her appearances to the children of Fatima, Portugal.