Edinburgh was coated in light snow on that February day, twenty-five years ago, the air a raw biting cold, as I set out to explore the ancient city. The National Gallery of Scotland lured me within, down a narrow staircase to an explosion of beauty, wildly out of proportion to the size of its modest rooms, its small wall space. I hold vague memories of standing in awe before landscapes, clusters of children in a garden, beautiful women, solemn portraits of men whose painted faces gazed back at me.

But one image remains etched in rich detail in my mind. I stopped, breathless, before John Duncan’s 1913 painting called, “St. Bride”. Two angels in gloriously patterned robes, whose miniature tapestries held scenes from Celtic mythology, were carrying a white-robed maiden, her hands joined in prayer. One angel supported her back with his hands, as her golden hair falling in great waves towards the sea. The other angel held her ankles while her knees rested on his shoulders. The angels’ wings were a symphony of colour from scarlet to rose to pale pink, shaded with greens, golds, midnight blues. The angels’ toes just brushed the surface of the sea where a seal swam ahead of them.
I had no idea what I was seeing. 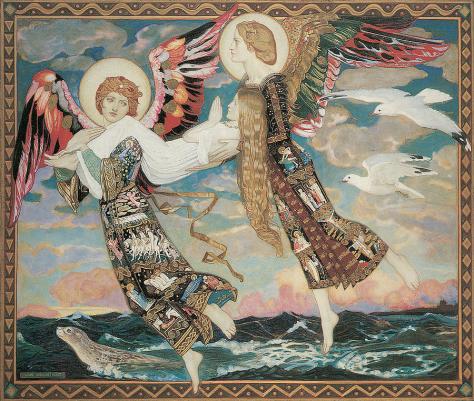 That evening, in the home of the friend with whom I was staying, I learned the story of Brigid. Legend tells that she was carried by angels across the seas from Ireland to Bethlehem in Judea, to be present at the birth of Jesus, that she became his foster mother. Other tales add that Brigid served Mary as mid-wife, and that when Herod was seeking the Child to destroy him, Brigid distracted the soldiers by running through the streets, allowing Mary and Joseph to escape with Jesus.

As I am sure you recognize, we are in the realm of story. But as I hope you realize, it is the story that matters, that lures us, inspires us, teaches us what we need to understand about life, about the sacred feminine aspect of the Holy.

Brigid, who was born in Ireland in 457 AD and founded a double monastery in Kildare sometime before her death in 524 AD, left no writings of her own. But there is a cauldron of stories that were carried in the oral tradition until Cogitosus, a monk of Kildare, wrote his “Life of Brigid” around 650 AD. At the time of his writing, Cogitosus noted that in the Kildare monastery, the nuns still guarded her sacred fire.

According to Cogitosus, Brigid was the daughter of Dubhthach, a pagan noble of Leinster, while her mother Brocseach was a Christian. Baptized at an early age, Brigid was fostered by a Druid. The stories of Brigid reveal her spirit of compassion for the poor: one day when she was a child, after she had milked the cows, she gave away the milk to some poor persons who were passing. She feared her mother’s reproof, but when she arrived home, her milk pail was found to be even fuller that that of the other maidens.

The adult Brigid approached a rich landowner, asking for land where she might grow food for the poor. The landowner agreed to give her as much land as she could cover with her cloak. Brigid lay down her cloak and it expanded until it covered many, many acres. Another story tells of Brigid’s father preparing for her marriage to a nobleman while Brigid herself wanted to become a nun. Through the intervention of the Christian King of Leinster, Brigid’s desire was granted. With seven other young women Brigid was consecrated to Christ. In a wonderful tale, during the Ceremony for Consecration of a woman to Christ, the very old Bishop Mel of Ardagh mistakenly read for Brigid the words for Consecration of a Bishop. When his mistake was pointed out to him by co-presider Bishop MacCaille of Longford, Mel insisted that the Consecration would stand, as it must have been the work of the Holy Spirit, and that Brigid would be the only woman to hold the episcopal office in Ireland.
In the book Miniature Lives of the Saints, I came upon this explanation for Brigid’s title, “The Mary of the Gael”: At a synod held near Kildare, during the lifetime of the saint, says an old legend, one of the fathers declared that he had seen a vision, and that the Blessed Virgin would on the morrow appear among them. Next day Brigid arrived with her companions, and the father immediately exclaimed, “There is the holy Mary whom I saw in my dream.” Brigid accordingly came to be called “The Mary of the Gael,” that is, of the Irish; for so pure was she in spirit, so holy in every action, so modest, so gentle, so filled with mercy and compassion, that she was looked on as the living image in soul and body of Mary the Mother of God. (London, Burns and Oates, 1959)

Legend says that Brigid’s mother gave birth to her on the doorstep of their home, one foot within, one foot outside the home. This would seem to be a prophecy for a life that would become a threshold, bridging pagan and Christian, woman and man, rich and poor….Goddess and Saint.

For the story of Brigid, founder of the Christian Monastery of Kildare is interwoven with the ancient Irish goddess who shares her name. As goddess, Brigid is known as maiden, mother and crone. And the Feast of Saint Brigid, February 1st, coincides with the ancient Celtic Festival of Imbolc, the beginning of spring. It is Brigid who “breathes life into the mouth of dead winter”. It is Brigid who holds the Cailleach energy, the energy of the cauldron where our lives, individually and communally, need to be transformed through the power of her fire, her water. We are now halfway through the dark time of the year, the feminine days within the transformative cauldron. This is the time when, as Celtic teacher Dolores Whelan says, winter is pregnant with summer.

As we celebrate Brigid’s Day we turn our eyes, our hearts, towards the maiden aspect of the sacred feminine, awaiting the return of the young days of spring, the promise of new life within as well as outside of us.