If we surrendered
to Earth’s intelligence
we could rise up rooted,
like trees.
(Rainer Maria Rilke)

At the end of a frigid Canadian January, I have come to Ireland for Brigid’s Festival of Imbolc, the day that welcomes Spring. Brigid is the one who “breathes life into the mouth of dead winter”. In the front garden of my friend, Dolores Whelan, the first thing I see are snowdrops….then one purple crocus, two golden ones. 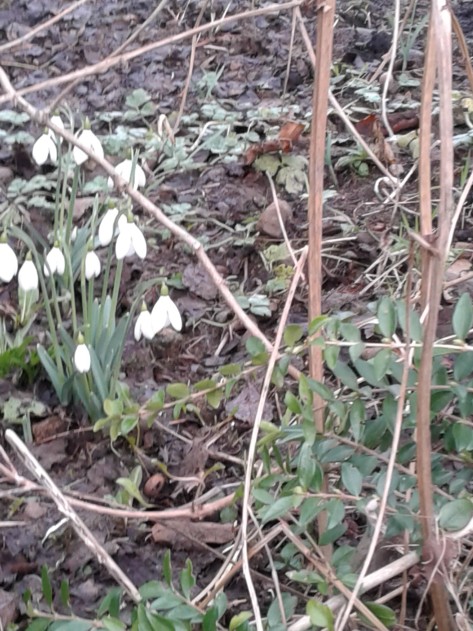 From a window on the upper floor, Dolores shows me that the Hill of Faughart can be seen, aligned with her home. Birthplace of Saint Brigid, 5th c. Abbess of Kildare, Faughart is ancient in memory, a place where the goddess Brigid was honoured in pre-Christian Ireland. Snow drop and crocus, saint and goddess, growing from this earth.

Brigid’s Festival honours both, and in the days that follow the two merge in my awareness, become intertwined, embodied in the fiery women whom I meet: Dolores and the volunteers who planned the events of the festival as well as the presenters, attendees, poets, artists, dancers, singers, writers… each woman aflame.

I listen as they tell their stories, either as a formal part of the festival’s program or casually in conversation over coffee or a meal, or in a pause between sessions.

I listen as Sharon Blackie tells the story recounted in her book If Women Rose Rooted (September Publishing 2016). With a PhD in Neuro-science Sharon found herself in a corporate job where her inner self was dying. Through a labyrinthine journey, one she describes as the feminine form of Joseph Campbell’s “Hero’s Journey”, Sharon followed the lure of her heart to the northwest of Scotland and on to Ireland, living on land near the sea where her soul finds a home.

I walk through Una Curley’s art installation of her own “Camino Walk”, her story of walking away from a life of successfully functioning in a corporate position that left her empty inside. Una chose instead the uncertainty and bliss of life as an artist. Una says the way to begin is to tie a piece of thread to a rusty nail and let the life you have designed, the life that no longer serves your soul, unravel… Part of her work traces the early flax industry of Ireland, rooted in the land, uniting the communities around the flax fields in a common endeavor.

Kate Fitzpatrick picks up her violin to express more profoundly than words her journey with women as they sought in the land and soul of Ireland the Healed Feminine. Kate’s quest was to bring peace and forgiveness to her people. The story of her spiritual journey with the Celtic Horse Goddess Macha is told in her book Macha’s Twins (Immram Publishing, Donegal, Ireland 2017)

Ann McDonald leads us in sacred movement, in breathing exercises, finding the power in our solar plexus. Deeply grounded, we release a voice that is resonant. Ann creates songs, receives songs that come to her while walking in pilgrimage or while holding sacred space. Her songs at the Ritual for Brigid’s Feast at Faughart come from deep within, inviting grace to embrace those present in the Oratory.

The Oratory on Faughart Hill on Brigid’s Day, February 1, 2018

Dolores, Una, Kate, Ann and Sharon are women whose lives differ on the outside. Yet I saw in each a life rooted in an inner passion, a deeply feminine connection with the land and a quiet walking away from cultural values that are out of harmony with and therefore destructive of the feminine soul.

How surely gravity’s law
strong as an ocean current
takes hold of even
the smallest thing
and pulls it toward
the heart of the world.

Each thing –
each stone, blossom, child –
is held in place

Only we in our arrogance
push out beyond what
we each belong to –
for some empty freedom.

If we surrendered
to Earth’s intelligence
we could rise up rooted,
like trees.

Instead we entangle ourselves
in knots of our own making
and struggle, lonely
and confused.

So, like children
we begin again
to learn from the things
because they are in
God’s heart,
they have never left him.