While in Louisville Kentucky to attend the “Festival of Faiths” in late April, I had the good fortune to visit the Hermitage in the woods near the Abbey of Gethsemane where  Thomas Merton ( Father Louis) would go for times of solitude and prayer, nature walks and contemplation which nourished his soul and inspired his writings on Spirituality and Justice.

Thomas Merton’ s Hermitage in the woods near the Monastery of Gethsemane, Kentucky

Though I knew of Merton’s life and writings, of his fierce cries for Social Justice, his passionate opposition to the Vietnam War, while visiting Gethsemane I learned of a poignant footnote to his life. In December of 1968, Merton had been on a pilgrimage, his quest to integrate insights of both Western and Eastern religious thought. While attending a monastic conference in Bangkok Thailand, Merton died suddenly. His body was transported home to the US in a plane carrying soldiers who had died in the Vietnam war.

But I was to learn something that was of immense importance to my own quest for the Sacred Feminine Presence: Merton had written compellingly of Sophia. I brought home from the Festival of Faiths Christopher Pramuk’s book: Sophia: The Hidden Christ of Thomas Merton (Liturgical Press, Collegeville, Minnesota, 2009)

Pramuk tells of a visit made by Merton to an artist friend, Victor Hammer, in nearby Lexington. Hammer was working on a triptych with a  central panel showing the boy Christ being crowned by a dark-haired woman. When Merton asked his friend who the woman was, the artist replied that he did not yet know. Merton said, “She is Hagia Sophia, Holy Wisdom, who crowns Christ.”

At Hammer’s request, Merton expanded on this insight in a letter written May 14, 1959:

The first thing to be said, of course, is that Hagia Sophia is God Himself. God is not only a Father but a Mother….(T)o ignore this distinction is to lose touch with the fullness of God. This is a very ancient intuition of  reality which goes back to the oldest Oriental thought…. for the “masculine-feminine” relationship is basic to all reality — simply because all reality mirrors the reality of God.

Pramuk continues to quote from this letter where he senses Merton writing in a stream of consciousness as though his friend’s question had opened ” a kind of conceptual and imaginative floodgate”:

Over the next five or six paragraphs, he identifies Sophia as “the dark, nameless Ousia (Being)” of God, not one of the Three Divine Persons, but each “at the same time, are Sophia and manifest her.”  She is “the Tao,the nameless pivot of all being and nature …that which is the smallest and poorest and most humble in all.” She is “the ‘feminine child’ playing before Him at all times, playing in the world.’ (Proverbs 8) ”  Above all, Sophia is unfathomable mercy, made manifest in the world by means of the incarnation, death and resurrection of Jesus Christ.

Merton identifies Sophia as God’s love and mercy coming to birth in us.”In the sense that God is Love, is Mercy, is Humility, is Hiddenness, He shows Himself to us within ourselves as our own poverty, our own nothingness (which Christ took upon Himself, ordained for this by the Incarnation in the womb of the Virgin) ( the crowning in your picture), and if we receive the humility of God in our hearts, we become able to accept and embrace and love this very poverty which is Himself and His Sophia.”

In 1962, six years before his death, Merton composed a poem to “Hagia Sophia/ Holy Wisdom” in the form of the Monastic Office, a  Prayer recited in Community to mark the times of day: Dawn: The Hour of Lauds; Early Morning : The Hour of Prime; High Morning; The Hour of Tierce; Sunset: The Hour of Compline.

Here is how Merton’s  Prayer at Dawn begins:

There is in all visible things an invisible fecundity, a dimmed light, a meek namelessness, a hidden wholeness. This mysterious Unity and Integrity is Wisdom, the Mother of all, Natura naturans. There is in all things an inexhaustible sweetness and purity, a silence that is a fount of action and joy. It rises up in wordless gentleness  and flows out to me from the unseen roots of all created being, welcoming me tenderly, saluting me with indescribable humility. This is at once my own being, my own nature, and the Gift of my Creator’s Thought and Art within me, speaking as Hagia Sophia, speaking as my sister, Wisdom.

I am awakened, I am born again at the voice of this my Sister, sent to me from the depths of the divine fecundity. 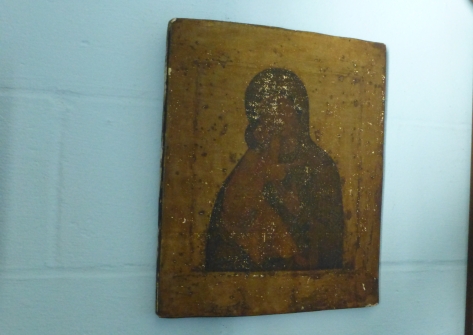 One thought on “Thomas Merton and Sophia”