Born in 1881, Pierre Teilhard de Chardin lived, studied, worked and wrote mainly in the first half of the twentieth century. As a scientist, he knew Darwin’s work in Evolution; as a paleontologist, he spent time excavating the story of evolution inscribed within the earth; as a mystic he was captivated with the wonder of an unfinished universe being drawn from within into a radiant future by a sacred presence of love.

Teilhard was convinced that until theology fully embraced the concept of an evolving universe, it would remain inadequate, crippled by its outdated worldview. He wrote: “Who will at last give evolution its own God?”

In the sixty plus years since Teilhard’s death, science has taken massive leaps of understanding, and theology is only beginning to catch up. In From Teilhard to Omega (edited by Ilia Delio, Orbis Books, Maryknoll, New York 2014), thirteen scholars take up Teilhard’s challenge.

“Sophia: Catalyst for Creative Union and Divine Love” by Kathleen Duffy, SSJ, offers us a glimpse into Teilhard’s relationship with Sophia.

Though a dedicated scientist, Teilhard calls on his mystic and poetic gifts to describe divine love at work in the cosmos. In his book Writings in Time of War (translated by Rene Hague, London: Collins, and New York: Harper & Row, 1968), Teilhard writes of a feminine presence drawn from the wisdom literature of the Bible, particularly the Book of Proverbs, (8: 22-31).

Teilhard’s poem opens at the beginning of time, at the moment when Sophia is embedded into the primordial energy that is already expanding into the space-time of the early universe. Only half formed and still elusive, she emerges as from the mist, destined to grow in beauty and grace (WTW, 192). As soon as the first traces of her presence become apparent, she assumes her mandate to nurture creation, to challenge it, to unify it, to beautify it, and ultimately to lead the universe back to God. With this mission as her guide, she attends to her work of transforming the world, a world alive with potential. (Duffy p. 27)

Duffy reweaves Teilhard’s poem, working through its shining threads new insights from science, wisdom literature and the work of many “who have contemplated the divine creativity at work at the heart of matter”.  Duffy names the feminine presence in Teilhard’s poem “Sophia”, from the Greek word for Wisdom. 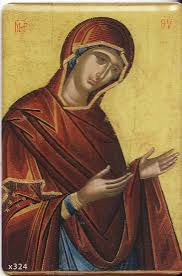 “Who then is Sophia?” Duffy asks. Her magnificent response to this question is worth the price of the whole book. Here are segments:

She is the presence of God poured out in self-giving love, closer to us than we are to ourselves, ever arousing the soul to passion for the Divine. From the very depths of matter, she reveals herself to us as the … very nature of God residing within the core of the cosmic landscape.

Attempting always to capture our attention, Sophia peers out at us from behind the stars, overwhelms us with the radiance of a glorious sunset, and caresses us with a gentle breeze….Shining through the eyes of the ones we love, she sets our world ablaze.

Sophia is the mercy of God in us….She sits at the crossroads of our lives, ever imploring us to work for peace, to engage in fruitful dialogue, and to find new ways of connecting with the other. She longs to open our eyes to the presence of pain and suffering in the world, to transform our hearts and to move us to action. (pp. 31-32)

Duffy says that Teilhard experienced this presence “with nature, with other persons, and with the Divine”:

He began gradually to recognize her everywhere — in the rocks that he chiselled, in the seascapes and landscapes that he contemplated, and in the faces of the dying soldiers to whom he ministered during the war….Teilhard came to know Sophia as the cosmic Love that is holding all things together. (p. 33)

Teilhard came to understand that Sophia can be known “only in embodied human actions”.

Duffy concludes her illuminative essay with these words:

Sophia was the source of Teilhard’s life…. Her constant care for creation during so many billions of years gave him confidence she would continue to be faithful… Teilhard vowed to steep himself in the sea of matter, to bathe in its fiery water, to plunge into Earth where it is deepest and most violent, to struggle in its currents, and to drink of its waters. Filled with impassioned love for Sophia, he dedicated himself body and soul to the ongoing work needed to transform the cosmos to a new level of consciousness and to transformative love. (p. 34)