In November 2000 four women and myself spent 5 days in Co Meath to do the workshop to awaken Serpent power and call her back to Ireland. At a birthing ceremony at Loughcrew, we experienced an awakening of the Serpent energy from the deep earth beneath us. In our myth, she poured out of the Stone Cairn and onto the rich green lands of Meath that surrounded us. On the final day we went to Tara – with the intention of grounding the energy of Serpent in the land as an act of sovereignity to the Feminine spirit  and we sent the power of Serpent out to the four corners of Ireland. 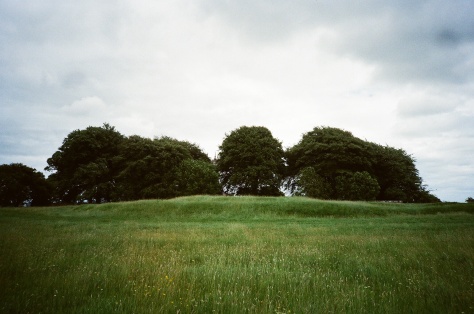 I hear the horses of the Tuatha Dé Danann thunder into Tara to witness the power of Serpent joining herself with the ancestors of this land. To Brigid in particular, she who was once known as Serpent Mother. I am knowing an ancient union has taken place that the Old ones have longed for. That Serpent would return from the depths of the Earth into the heart of this land and unite with the people of the Sidhe from whom she has been long separated.

A Higher Light of Brigid

In the 2 years of 2011- 2013, I returned again to work with Brigid and Serpent and I was linking with the significant universal energy shift predicted to happen in 2012. Out of this reflection and journeying came an understanding of Brigid as ‘Cosmic Brigid’ in a far-reaching way. In the myth that was then weaving, it was Brigid’s light that could connect us with the Divine Feminine coming to birth in the cosmos as part of the 2012 alignment. The ancient energies of the Tuatha Dé Danann were always linked to the stars and to cosmic light. This ‘cosmic’ link with Brigid has never been lost and Brigid as spiritual midwife can support the birth of new light into the world and help to ground it safely where it can be used for spiritual development of the human race. I also knew that the higher evolved ‘Serpent’ energy we had been working with in 2000 is ‘Serpent in the Heart’.

In 2013, at Imbolc, I gave  a talk at the Navan Centre in County Armagh that was pulling together these new ideas and I called the presentation: ‘A Higher Light of Brigid’. This extract below summarises the evening where a new energy of Brigid was tangibly felt:

On Friday, 8 February 2013, an audience of some forty people have gathered at Emain Macha in County Armagh to listen to a presentation of the stories of Brigid, together with music, songs and poems. Brigid’s presence is tangible in our midst. Carrying her spirit on the wind, Brigid, Celtic Mother Goddess and Saint, brings to all who might receive her light the qualities of truth, clarity, creativity and healing. Tonight, we dare to call her ‘Cosmic Brigid’ and ask her to bring in an even higher light than heretofore. One that is linked to the sun and the moon and the stars, to all of the heavens above us.

That evening was the naming of Brigid as Cosmic Brigid. And it was a year later that I went to the Brigid of Faughart festival in Dundalk and presented the talk on ‘Cosmic Brigid’. This idea continues in my awareness today as we move onwards in our awakening of the Feminine spirit and witnessing its influence as it filters in to society and is changing our perspectives about women and roles and power.

New paradigms are being born and old, outdated patterns of spirituality are being shed. The idea of ritual and ceremony is still a potent way to link the cosmic energies with the land – thus blessing it and clearing it. The powers of Serpent energy, Feminine light and Cosmic Brigid to assist with this are, I believe, real.

We are linking across universal truths. In Ireland we hold and awaken our indigenous spirituality and we are no longer a separate island but part of a newly emerging world culture of indigenous spiritual potential that is currently giving birth to a healed Feminine Light.

I am knowing Serpent to have risen. From the centre of the Earth she came in Fire. Across the land she came in Water. I know her to have moved up through my body from the below to the above and be transformed in the love of the Heart.

Kate Fitzpatrick is the author of Macha’s Twins, A Spiritual Journey with the Celtic Horse Goddess. She is currently writing a book about her experiences of shamanic work with the evolving roles of Brigid saint and Goddess.  Her email is katefitzpatrick2@gmail.com