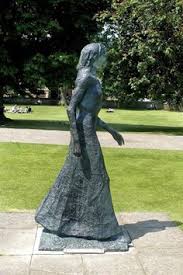 This Magnificent statue created by artist Elizabeth Frink on the grounds of the Salisbury Cathedral in England shows the strong, purposeful Magdalene striding forth on her apostolic journey as “Apostle to the Apostles”.

“High on an escarpment crowning the medieval walled city of Vezalay France, stands the magnificent basilica of St. Mary Magdalene”. That is how Episcopal priest and writer Cynthia Bourgeault opens her book, The Meaning of Mary Magdalene (Shambala, Boston and London, 2010). Bourgeault spent Holy Week of 2005 with the young monastic order in residence at the Cathedral of Vezalay. Here she would have a stunning awareness of Mary Magdalene’s presence in the events of the death and resurrection of Jesus.

This mixed community of men and women monks is well known for the imagination and beauty of its liturgy, and toward the end of the Good Friday Liturgy I witnessed an unusual ceremony that changed forever how I understood my Christianity….

The late afternoon shadows were already dimming the cathedral when we finished with communion, followed by the traditional stripping of the altar. And then came the ceremony I am speaking of. Two of the sisters brought forward a small corpus – the crucified Christ figure that traditionally hangs on Roman Catholic crosses. It was carved in wood, about two feet long. Tenderly they wrapped it in the altar cloth, laid it on the altar, and placed beside it an icon of the Shroud of Turin (the portrait of Jesus allegedly imprinted on his original burial shroud and revealed through radiocarbon dating). They set a small candle and incense burner at the foot of the altar. And then, as sunset fell, one of the monks began to read in French the burial narrative from the Gospel of Matthew.

Enchanted by the mystical beauty of all this – the smell of the incense, the final shafts of daylight playing against the great stone walls of the cathedral – I allowed the sonorous French to float by my ears while I drifted in and out, catching what I could. I heard the description of Joseph of Arimathea asking for the body of Christ, wrapping it (just as the sisters had just done) in a linen cloth, laying it in a tomb. And then out of the haze of words came “et Mary Magdalene et l’autre Marie restaient debout en face du tombeau…”
That’s when I did my double take. Mary Magdalene was there? That was in the scripture? Why hadn’t I ever noticed it before?

Thinking that maybe my French had failed me, I went back to my room that evening, took out my Bible, and looked it up. But yes, right there in Matthew 27:61 it reads: “And Mary Magdalene and the other Mary remained standing there in front of the tomb.”

Suddenly the whole picture changed for me. I’d thought I knew the tradition well. …. How could this key point have escaped my attention? No wonder Mary Magdalene came so unerringly to the tomb on Easter morning; she’d stood by in silent, unflinching vigil the whole time Jesus was being laid to rest there. Maybe she never left…. Since that moment I have literally not heard the Passion story in the same way. It inspired me to go back to the gospel and actually read the story in a new way. (pp.5-6)

Bourgeault reflects further that much of what we know of Mary Magdalene has been absorbed “through the dual filters of tradition and the liturgy, which inevitably direct our attention toward certain aspects of the story at the expense of others.” (p. 6)

Turning to the Gospels directly, Bourgeault focuses mainly on John’s account of the resurrection. Here is the story:

Mary (Magdalene) arrives alone at the tomb in the early hours of the morning to discover that the stone blocking the tomb has been rolled away. She hurries off to find Peter and “the disciple whom Jesus loved” who race each other to the site, discover the tomb empty and the grave cloths rolled up, and return home in bewonderment. After the two of them have gone their way, Mary stays behind, weeping beside the tomb. Then, in a unique and immortally reverberating encounter:

She turned around and saw Jesus standing there, but she did not recognize him. Jesus said, “Woman, why are you weeping? Who are you looking for?” 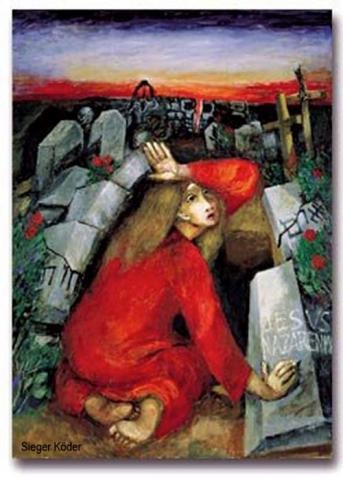 She thought it was the gardener and answered him, “… if you have taken him away, tell me where you have put him and I will go and remove him.” Jesus said to her, “Mary.” She turned and said to him, “Rabboni” – which means Master. Jesus said to her, “Do not cling to me; you see I have not yet ascended to my Father. But go to my brothers and say to them: I am ascending to my Father and your Father, to my God and your God.”
So Mary went and announced to the disciples, “I have seen the Lord, and this is what he said to me. (John 20:14-18)

Bourgeault continues, pre-empting the June announcement from the Vatican:

It is on the basis of this announcement that Mary earned the traditional title of “Apostle to the Apostles.” The first to witness to the resurrection, she is also the one who “commissions” the others to go and announce the good news of the resurrection. (p. 8)

One small synchronicity I would like to point out: the verse in the Gospel of John cited above: Jesus said to her, “Mary.” is numbered John 20:16. The year of Mary Magdalene’s full recognition….

2 thoughts on “Apostle to the Apostles”