The Storyteller is nearing the end of her tale. We listen attentively, hearts astir with wonder. Will Midir win back his love, Etain?

The steward went with all stealth from Tara, and as he watched, it seemed to him that all the men from all the Elf-mounds in the world were raising tumult there, and Midir, standing on a hill, urged on his Fairy Hosts. Then to his surprise, the King’s man saw that the strong dark blue Fairy oxen were yoked by their shoulders so that the pull might be there, and not on their foreheads, as it had always been in Ireland. And as they worked, the hosts of the Elf-mounds sang:

“Heave here, pull there, excellent oxen,
In the hours after sundown,
And none shall know whose
Is the gain or the loss
From the Causeway of Tavrach.”

And the causeway would have been the best in the world, had not the work of the Fairy Hosts been spied upon, but Midir was angry because of this and he left some defects in the work.

Meanwhile the steward returned to Tara, and told the King of the magic he had witnessed during the night, and he told him of the new way he had seen of yoking the oxen so that the pull might be upon their shoulders. When he heard this, Eochaid decreed that henceforth all the oxen in Ireland should be thus yoked, and for this decree he was called Eochaid Air-em, “The Ploughman.”

“There is not on the ridge of the world a magic power to surpass the magic I have seen this night,” the steward said, and as he spoke, Midir appeared before them, his loins girt and an angry look on his face. Eochaid was afraid, but he made Midir welcome.

“It is cruel and unreasonable of you to lay such hardship and affliction on me and on my people, and then to spy on me,” Midir said. “My mind is inflamed against you.”

“I will not give wrath for your rage,” the King said.

“What stake shall we set upon the game?” Eochaid asked.

“That the loser pays what the winner shall desire,” said Midir of Bri Leith, and they sat down to play. Midir won with ease, and Eochaid’s stake was forfeit.

“You have taken my stake,” he said.

“Had I wished I could have taken it before now.”

“My arms about Etain, and a kiss from her lips.”

Eochaid was silent. Then he said: “Come one month from today and it shall be given to you.”

Midir left Tara for the Fair Mound of Bri Leith, and Eochaid, losing no time, called the flower of the warriors to his land, and the best war lords in all Ireland, and he mustered them around Tara, without and within, ring upon ring of the heroes of Ireland to guard the Hill of Tara, and the King and Queen were in the centre of the House; and the Courts were locked and guarded by the Men of Strength, and the Men of Hearing, against the Man of Magic who was to come.

Etain was serving wine to the King and the Lords in the midst of the Hall, and as she bent over towards the goblet in the King’s hand, Midir, in the centre of the Royal House, came towards her. He was fair at all times, but on this night he was fairest, and the hosts of Tara were astonished at his beauty, and at the radiance of him. In the silence, the King made him welcome.

“What is pledged to me, let it be given to me,” Midir said.

“I have given the matter little thought,” said the King.

“What is promised is due,” Midir said.

Etain was silent, and her cheeks were red as the scarlet rowanberry, and then, by turn, white as snow.

“Do not blush, Etain,” Midir said to her. “I have been a year seeking you with gifts and treasures, the richest and most beautiful in Ireland. It is not by the dark magic that I have won you.”

“I will not go with you, Midir, unless the King releases me to you,” Etain replied.

“I will never release you,” Eochaid said. “But as for this stake, I willingly allow this warrior to put his arms about you, and to kiss you, here in the middle of the Royal House, while the hosts of Tara look on.”

“It shall be done,” said Midir, and he took his weapons in his left hand, and with his right arm he held Etain round the waist, and as he kissed her, and kissed her again, he bore her away in his embrace, through the skylight of the House.

The men of Ireland rose in shame about their King, and he led them out in hot pursuit. But Eochaid, High King of Ireland, and his hosts, saw only two snow-white swans in full flight over Tara. 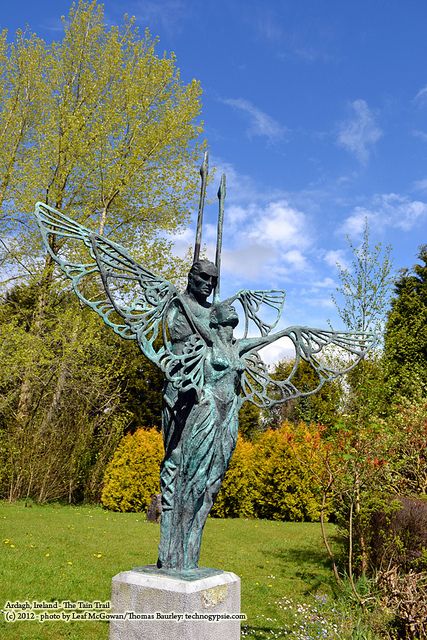 A statue in Ardagh, Ireland, honours the transformation of Etain and Midir into swans.